Read the important information below to discover…
The SMART and EASY Way to STAY Tax Compliant, PAY ZERO SALES TAX and GROW Your Amazon Business for Long Term
Ongoing Success!
Put An End to All Your Tax Worries With This Simple-To-Use Total Compliance Sales Tax System.

When it comes to living the online freedom lifestyle, Amazon has become a very popular platform for many people, families and internet entrepreneurs.

It has not only created one of the most advanced fulfillment networks in the world by storing, packing and shipping your products to your customer… it has also provided Amazon sellers with multiple advantages.

Some of these include easy access to its HUGE marketplace, two-day fast delivery, secure payments and more.

As a result, this amazing and profitable opportunity has skyrocketed online sales to almost $190 Billion in the last few years alone.

Until recently, consumers could often buy products online for less by saving on sales tax, but consequently, states lost BILLIONS of $$$ in uncollected sales tax revenue.

This caused most States to ‘get in’ on the giant revenue pie, and began charging all online ecommerce businesses sales tax, impacting EVERYONE doing business on the internet, including Amazon FBA sellers.

These new tax policies became known as the “Amazon laws”, and since they’ve been released, most FBA Sellers and online business owners unfortunately feel like they’re literally waiting to be hung… it’s just a matter of time. 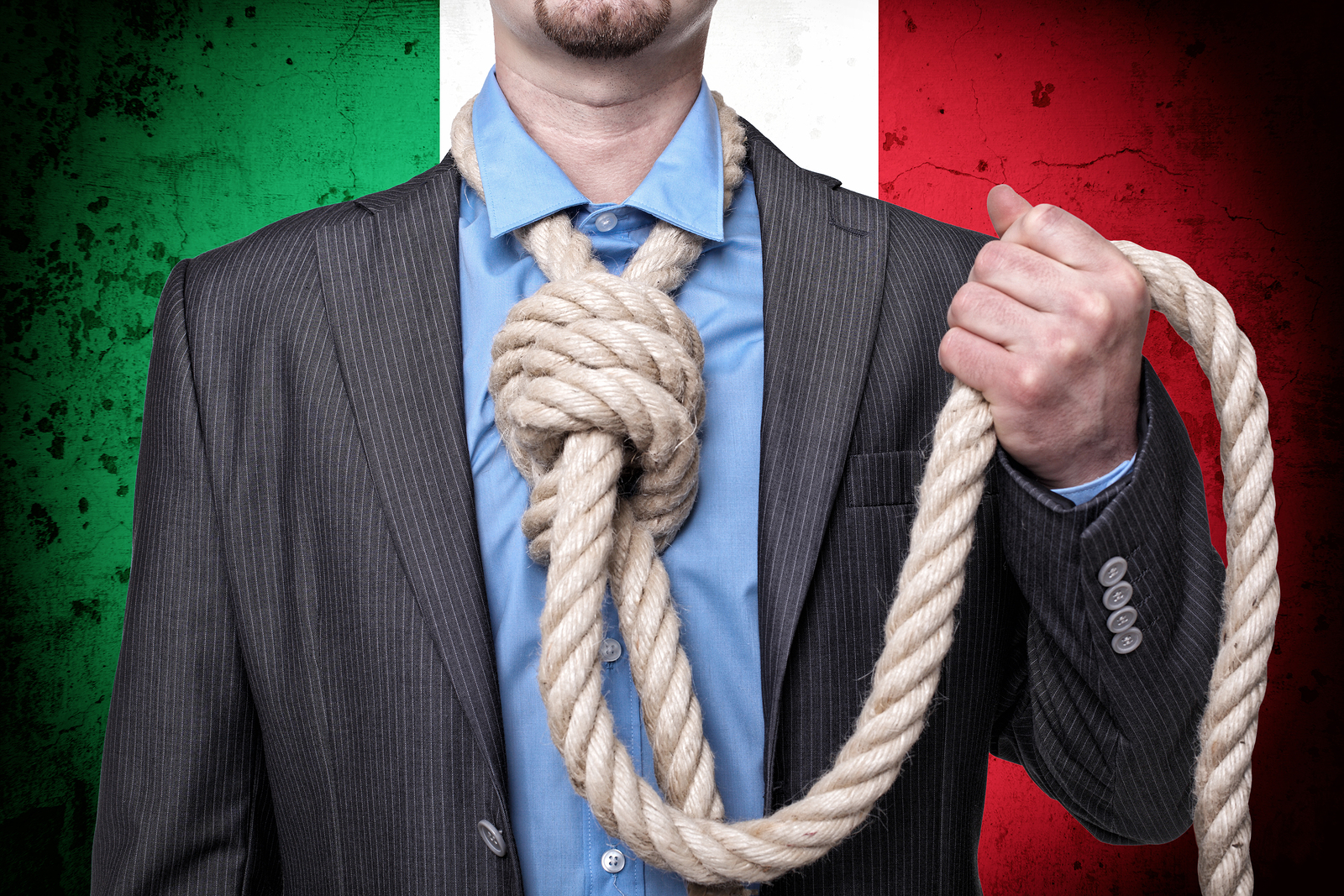 The reason for this is because as an FBA Seller or online business owner, you must now;

When sales tax becomes overdue, it then becomes a liability that comprises of three things; sales tax PLUS interest PLUS penalties, totalling up to a MASSIVE 41%.

Here’s a quick example of a sales tax liability owing on just $5,000 in sales in different States: 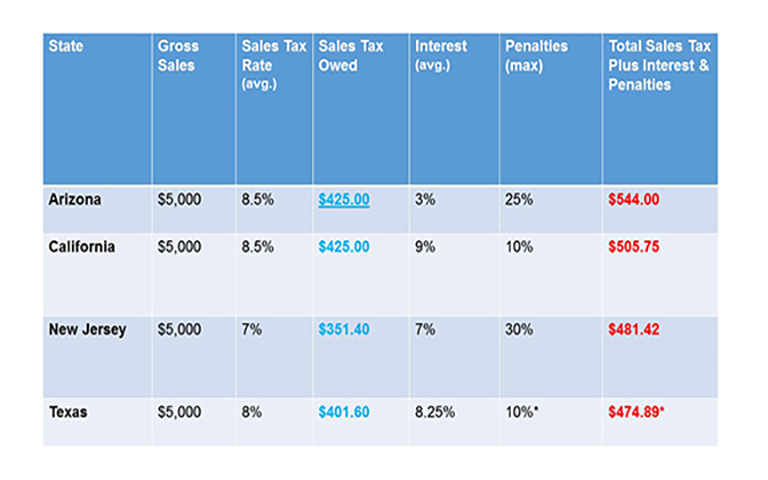 As an FBA seller (or any online business owner), state governments hold YOU responsible for being in COMPLIANCE.

If you’re an established FBA Seller and have NOT collected and paid your sales taxes, you are HEAVILY under water and need to act immediately.

Failing to Collect and Remit Sales Tax When you Were Required to Means You’ll be Obliged to Pay the Sales Tax Liability Out of Your OWN POCKET!

This is why running your business while being out of compliance is equivalent to FLUSHING Your Profits Down the Toilet! 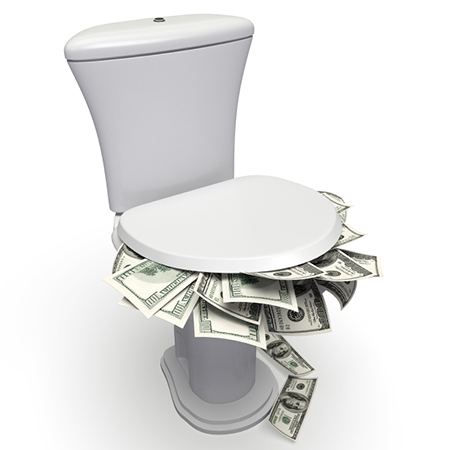 Choosing to ignore the responsibility of becoming compliant does not free you from being indebted to the collection agency of that particular state… and, it gets worse…

Neglecting to Pay the Outstanding Tax Liability Could Not Only Send Your Business Into Liquidation but Can Also Put you at Personal Risk of Bankruptcy!

The State Sales Tax Departments have powers to exercise their rights and take legal action against you to recover the amount owing, plus penalties and interest. 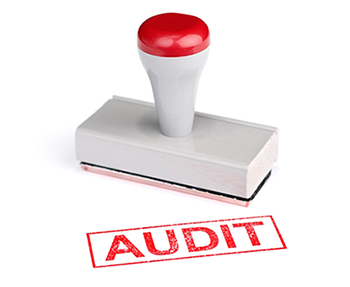 Let’s say you’re an Amazon FBA seller and you fail to collect or remit sales tax in one of the FBA states, nothing may happen at first, and after a year or two with no audit, you may incorrectly assume that you’re in compliance.

A few years later, when the state tax agency eventually searches your business and does a manual audit, you’ve now entered their taxation audit process and are legally bound to co-operate, collaborate and comply.

At this point, the sales tax auditor will require you to pay the uncollected taxes immediately without hesitation (plus costs). The longer you take to pay, the bigger the amount you’ll be forced to pay in the long run.

Anyone Who’s Been Audited from the Tax Department Will Confess its A Very Hard Battle to Recover From.

In a perfect world, you’ll get audited in the first year of business, keeping your taxes and penalties down.

However, we’ve seen many cases taking 7-10 years and even longer for audits to finally reach businesses with a nasty surprise.

At that point, it’s generally too late for business owners to recover because the tax agency assesses every single transaction from day one, which generally accumulates too big of an amount for the business owner to pay, causing the destruction of that business plus personal litigation.

Where and When Does Sales Tax Need to be Paid?

You need to collect and remit sales tax when you have nexus. No nexus? No problem. You’re off the hook for sales tax.

If you HAVE nexus however, then sales tax is your responsibility as long as you continue to trade in an FBA state.

It’s just a fancy way of saying you’re obliged to collect and pay sales tax by the tax office in a given state.

Basically, you have nexus in each and every state where your business benefits from that state’s services or infrastructure.

Examples are using that state’s roads or bridges, sending your staff there for any business reason, and/or storing products in a warehouse in that state (yes for Amazon sellers).

For you as an FBA business owner, generally speaking, you have nexus (tax liability) at least in your home state where you live and also the states where your products are warehoused.

Note: There are only five states in the US that don’t have nexus:

If you are NOT in one of these states and use Amazon’s FBA service, then you have sales tax nexus and are required to collect and remit sales tax in your business.

Behind on Sales Tax?

If you have been selling for 6 months or longer, and have NOT collected or remitted sales tax, you’re not alone. This is common for businesses in their first few years of trading. It’s also likely you had the wrong information and didn’t even know that collecting and remitting sales tax was required.

The BAD NEWS is that NOT getting into COMPLIANCE ASAP is a financial disaster waiting to happen and extremely detrimental to your business.

Each Day you are NOT Collecting and Remitting Sales Tax in the States Where You Nexus, you are Responsible for the Sales Tax That’s Accruing.

Doberman Dan – How To Make Big Money From Small Lists